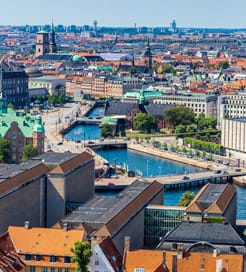 How to book ferries from Sweden to Denmark

There are 2 ferry routes operating between Sweden and Denmark offering you combined total of 63 sailings per week. Stena Line operates 2 routes, Gothenburg to Frederikshavn runs 7 times per day & Halmstad to Grenaa about 14 times weekly.

As the frequency and duration of crossings on some routes varies we would advise that you do a live search for crossings from Sweden to Denmark to get the most up to date information.

Ferries from Sweden to Denmark

Sweden is the largest Nordic country in northern Europe, bordered by Norway to the west and Finland to the east.

A country famed for its stunning landscape, Sweden also has a fast-paced capital in Stockholm, spread across 14 islands connected by 57 bridges, which brings with it a world-leading fashion scene and an immersive historic district.

Further north, you’ll find untouched wilderness blanketed by snow, with dramatic mountains in the skyline, dense forest and countless reindeer in front of you and the mesmerising Northern Lights shining above. There are also plenty of beautiful islands and archipelagos dotted in the Baltic Sea.

Sweden is an excellent departure point for a large number of destinations in Scandinavia and northern mainland Europe. With numerous ferry ports on the country’s long coast, operated by leading ferry companies, travelling by ferry is the most convenient way to explore Sweden’s islands and neighbouring countries.

Home to Renaissance castles, a riveting Viking history and highly-rated standards of living, Denmark offers a wealth of unforgettable experiences. It’s also widely regarded as one of the most liveable and happiest nations in the world thanks to its progressive politics, spellbinding landscapes and mix of contemporary and traditional architecture.

Innovative Nordic cuisine has flourished in the capital of Copenhagen, with the restaurant ‘Noma’ voted the best in the world in 2014. Or you can take your pick from the 14 other Michelin-starred establishments scattered throughout the city.

There are plenty of ferry routes to Denmark from the surrounding Scandinavian countries and within the country itself. With numerous ports spread across the Danish peninsulas and islands, travelling by ferry is a convenient way to reach this Nordic nation.